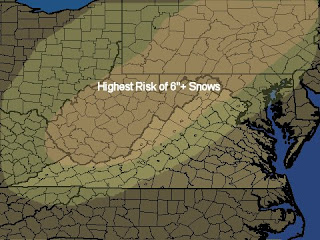 It is all speculation now, but models look very consistent on this storm. Based on the way they look I am putting out this graphic. Highest risk area now for 6″+ and a general area I think will have impacts on the situation.

This is all preliminary!

A few things that are in play:

The track is also really important and impossible to peg at this time. I will update as I can!

This site uses Akismet to reduce spam. Learn how your comment data is processed.